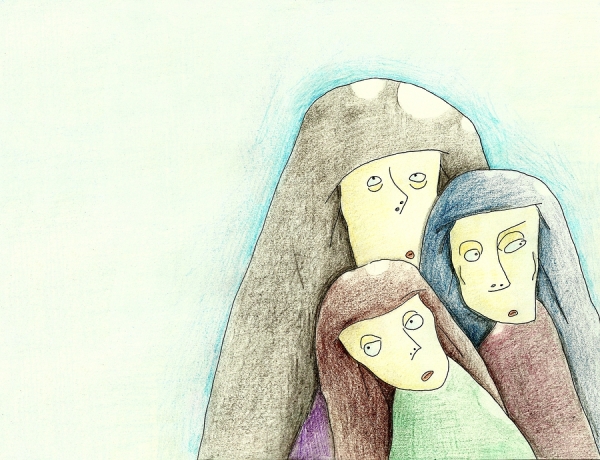 There are many versions of this story and this one is about how women may use each other for good or ill.

A young woman had lost her mother early in life and so was raised by her father deep in the forest (as he was a hunter by trade). There came a time when she thought she would go out into the world and see how she got on. She was a pretty young woman and likeable, being friendly and not possessed of jealousy or guile.

She managed to find work in the kitchens of a nearby palace, as young women do in such stories as this one. Her pleasant qualities brought her to the attention of the queen who found she liked her very well. And in the way of many women who have not learned to value each other, the other servants became jealous of her and thought of ways to spoil the girl’s favour with the queen.

Those who envy always look for ways to spoil. Sometimes they do this even unbeknownst to themselves, for envy can be quiet like a snake, or tiny like the prick of a needle. And the urge to spoil is a silent follower, even slipping between the words of a pretty speech.

The other girls knew that the queen placed a high value on the skills of a good housewife and so they told her that her favourite had boasted of being able to spin flax into fine thread. The queen did what queens do in stories such as this one and told the girl she would have 24 hours to spin a pile of flax into thread, and she gave her a room to do it in.

The girl did not dare to say she had never touched a spinning wheel in her life (because if she had done that sensible thing there would be no story). But as she wept in the night an old woman came into the room and asked what the matter was. When the girl had told her, the old woman made a bargain with her: “If you will call me Aunt on the happiest day of your life, I will spin this flax for you.” And so the girl promised and the old woman spun the finest linen thread the queen had ever seen, and consequently the queen valued the girl even more.

So envy rose up again and the other servants told the queen the young woman had boasted she could weave a beautiful cloth from that thread.

Same scenario, different old woman: “If you will call me Aunt on the happiest day of your life, I will weave the linen for you.” It was agreed and once again the girl rose in the queen’s estimation.

So, nothing daunted and still determined to spoil, envy claimed the young woman had boasted she could sew fine shirts from that cloth. Off she goes. Weeping, of course, as you would, having never sewed a seam in her life. Yet another old woman with the same request: “If you call me Aunt on the happiest day of your life…”

The queen was so happy with all of this that she arranged for the young woman to marry her son, saying “You will never have to employ a servant to spin, weave or sew for you as you can do it so well yourself.” (I hear you thinking – Hmmm, here is a problem. You’re smart, you are, but then…this is a fairy tale. Fear not.)

The prince was very happy with his mother’s choice because the young woman was a really pretty young woman, as I have said, and likeable too. No guile. No jealousy. So the wedding feast was prepared and they were married and sat down at the table with their guests.

But then an old woman entered. She was made very ugly by having the longest nose you have ever seen. It was hard not to stare at that nose with astonishment. The young woman, however, jumped up and curtsied. “Welcome Aunt,” she said. “Please take a seat at our table.”

Then came an old woman who was hunched over so badly that she could barely look up. Her back was broad and rounded. “Welcome Aunt,” said the young woman, and she invited the old woman to sit.

After this an old woman arrived who had great round eyes, bloodshot and full of tears. She also was greeted as Aunt and invited to sit.

But later the prince, not a tactful lad and overcome with curiosity as to how his young wife could have such ugly relatives, asked the cause of their afflictions.

“Well,” said the first, “my nose has grown through many years of sitting and nodding and poking over my spinning.” The second told him her back had become so misshapen through years of hunching over a loom, and the third told him of how her eyes had become sore and strained through a long life spent peering and sewing at a fine seam.

“Well!” said the prince,”If that is the case, my wife shall never spin, nor weave, nor sew!”

And she didn’t. And she lived happily ever after!

Have you noticed how women, especially when they work together, are often envious and find ways to spoil? Susie Orbach and Luise Eichenbaum wrote a book called Bittersweet: Love, Competition & Envy in Women’s Friendships (1987), published as Between Women in US. It describes how women work well together when they have a common cause to fight for, but how they then often destroy what they have created through envy and spoiling.

Is this because we have been powerless through so many centuries and the only way we can express our anger is by hurting each other? And by sabotaging our own success?

We will be unstoppable when we look for ways to seat each other at the feast.