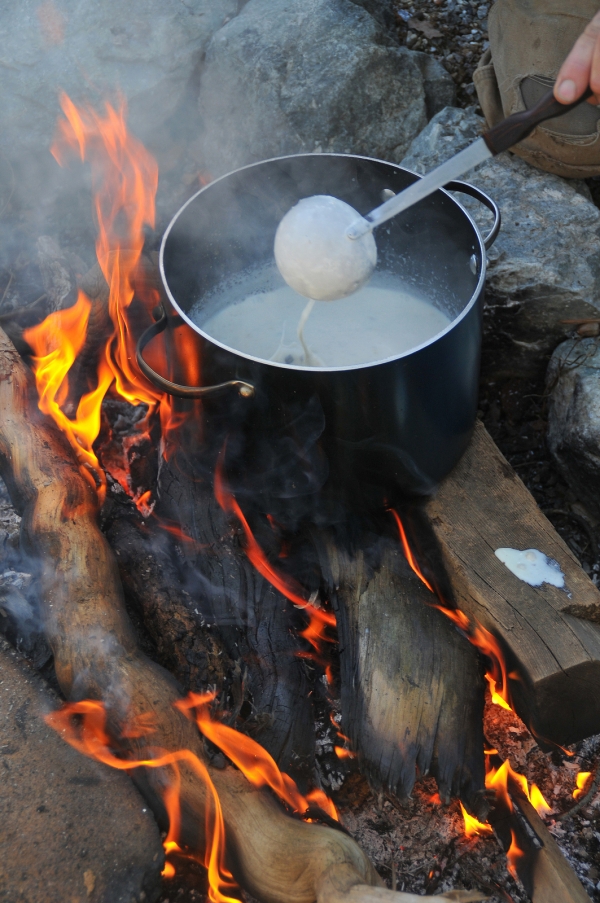 Maybe you know the story of Stone Soup. I think it comes from Eastern Europe because there is a dark and ice laden forest in it. The snow is thigh deep and it hurts to breathe. A light sleet has started to whirl through the trees and thick dark clouds are moving across the face of the moon. The man who moves through this landscape knows that he will not see the frozen morning if he does not find shelter.

The wind that is carrying the sleet in flurries about him makes his eyes fill with tears. When the tears spill, they freeze on his cheeks. He pulls his hood more closely about his face and shoves his hands more deeply into his pockets. He feels the smooth stone he found three days ago. He turns it over and over in his fingers, taking pleasure from the way his thoughts turn towards the feel of the stone, and away from the pain and the fear of the intense chill that is spreading through him. Then he sees a light glimmer ahead. Is he dreaming it? Is it the light we move through to death?

The man tries to blink so he can see more clearly. His eyelashes are frozen now though and the tiny muscles around his eyes no longer move to his command. He tries to squint into the distance. His walk has become a floundering, a slow wading that takes all of his energy, it seems, just to think about the next step. But he continues to move. And the light glows nearer. After a long time he knows it is a hut and that he is saved.

When he gathers his remaining strength to bang on the door, calling out, there is no answer. He tries again, calling that he will die if he is not given shelter and food. And a voice answers. It is the voice of an old woman, and to his disbelief she shouts that he must go away. She is alone and she has nothing to give him. She does not have enough food for herself. He must look for help elsewhere. The man sinks to the ground in despair.

Then inspiration seizes him. “I have food,” he calls. “I have enough for both of us. If only you have a pot, and water, and a fire, I have a magic stone in my pocket that will make us a delicious soup.”

There is silence within. The man prays to his gods. He waits. He knows he has not much time.

Then the door opens a crack. There is a chain across but he has not the strength to force his way in even if there were no chain and only the hand of an old woman between himself and warmth, the hand that belongs to a suspicious and cold pair of eyes that peer out at him. “Show me the stone,” she demands, and when he does, “It looks like an ordinary stone to me. You are a liar, I think.”

“Have you ever known a magic stone to look like anything other than an ordinary stone,” he asks. His wits are not yet frozen. Unwilling to admit she does not know the answer to that question, the woman lets him in. He staggers to the fire and holds his hands to its warmth although it is a small fire, embers really. After a moment she begins to demand that he make the soup. She is hungry, she tells him, and her cupboard is empty.

“This fire is too small to boil soup,” he says. “You must build the fire and then put on a pot of water. That is the first step.” The woman is full of greed now and she does as he says. As the flames rise and he is warm enough to take off his coat and boots, he brings the stone from his pocket and drops it into the pot. When she asks how long, he says soon, soon.

After a while he muses: “If only we had an onion, this would be a fine soup, even better than my usual brew.” The woman tells him grudgingly she has an onion, and she fetches it, peels it, chops it, adds it to the Stone Soup. Then a little savoury smell begins to rise, and the man remarks how the soup would smell even better if they had a couple of carrots. She has these too, by a miracle. At his next musing, she has a handful of dried herbs and two potatoes. And finally, as her mouth waters and her stomach contracts with hunger, she answers his wish for a fine fat sausage.

In a while the hut fills with delicious steam and a thick soup bubbles on the fire. And magic has indeed been done. Their bellies are filled with a warm and tasty dinner made from only a stone. Who’d have thought that such a thing were possible? The woman persuaded her benefactor to stay with her for the winter and they had many a fine meal from that marvellous stone.

Many of us have an old miser inside us and this is the part of ourselves to which we give house room, keeping our hungry aspect warm at a tiny fire, making sure the door is always barred with fear and the provisions are doled out sparingly in case there are not enough. But this is not our wise aspect. At one time it seemed this was the best, the safest way to live. But now that time has gone. Now it is time to know this.

When our clever witty aspect knocks at the door, we send the creative self away, to starve and freeze in the woods. Why don’t you shoulder fear aside and open the door of your heart? The stranger that is your cast out self will show you how to nourish and warm yourself. Gradually a thaw will set in.